Magyar
You are here:

The tankpool24 team experienced its most unfortunate race weekend to date at the penultimate round of the FIA European Truck Racing Championship on the Circuit Bugatti in front of almost 60,000 spectators. In the end there were two FIA points and a third place in the Grammer Cup - both for Fabio Citignola; but also various retirements, partly due to accidents, partly for technical reasons.

In the final race Norbert once again had to start from the back because of a previous retirement. After just a few laps he had made up about ten places when the turbo burst on the Mercedes in a highly spectacular manner on the home straight in front of fully occupied grandstands. The whole area was covered in white smoke. Also in this race Norbert had to register as a retirement.

The season finale will take place next weekend, October 5th and 6th, at the Circuito del Jarama north of the Spanish capital. 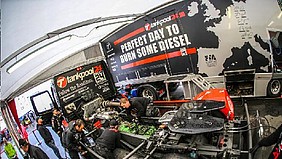